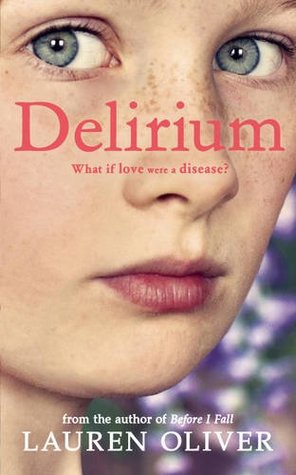 Lena Haloway is content in her safe, government-managed society. She feels (mostly) relaxed about the future in which her husband and career will be decided, and looks forward to turning 18, when she’ll be cured of deliria, a.k.a. love. She tries not to think about her mother’s suicide (her last words to Lena were a forbidden “I love you”) or the supposed “Invalid” community made up of the uncured just beyond her Portland, Maine, border. There’s no real point—she believes her government knows how to best protect its people, and should do so at any cost.

But 95 days before her cure, Lena meets Alex, a confident and mysterious young man who makes her heart flutter and her skin turn red-hot. As their romance blossoms, Lena begins to doubt the intentions of those in power, and fears that her world will turn gray should she submit to the procedure. In this powerful and beautifully written novel, Lauren Oliver, the bestselling author of Before I Fall, throws readers into a tightly controlled society where options don’t exist, and shows not only the lengths one will go for a chance at freedom, but also the true meaning of sacrifice.

I have read this book only once and I just can't bring myself to read it again for a single reason: I abso-freaking-lutely loved it!! I'm so afraid that I won't love it as much as I loved it during the first time, so I have been postponing the second reading for 1,5 years now (and I still haven't done it). So I have to apologise if my review is a bit vague because I can remember only so much without rereading.

The world of Delirium is one of my favourites dystopian ones. Ever. You can straight away see how much time the author has invested in it: she has come up with an original idea of this really twisted society which sees love as something disturbing and dangerous, the book of SHHH which guides the lives of cured of Deliria (which I by the way just ADORED), how Deliria can be "treated", and how the cured live after the procedure. It was really interesting how a particular environment and its customs can become to a norm to anyone if this person has lived in it for her whole life, like in the case of Lena. She is afraid of "infected" people and she wants to be cured as soon as possible. Well, at least in the beginning, before she met Alex.

If I'm completely honest, I would refuse to be treated as well if I came across with a guy like Alex. He is one the most attentive, smartest, romantic, and caring YA book love interests I have read about. I still can't get it out of my head how Oliver described him: hair coloured like burning leaves, and eyes all honey and golden. But despite the fact that he is described as the man of my dreams, his personality was the thing that made me fall in love with him; he is a multidimensional character. I loved how he is really careful with Lena as well as very patient. It is always a delight when the author doesn't jump straight away to the two main characters being lovers but gives them time to develop the relationship properly. Their relationship felt real, authentic, and very very intimate by the end of the book.

Even though the beginning of the book was rather slow, I didn't mind it at all (I know that this might be a problem for some people). The fact that the readers were well introduced to the culture of the cured society was very important as it will be a major part throughout the whole trilogy. If the setting wasn't well established in the beginning, I'm not sure if I would have loved the book as much.

Finally, I have to say that this book didn't only make me giggle like a school girl, but it also made my heart beat in my chest as I was afraid, and my eyes water as I felt the pain Lena felt. There were so many big emotions in this book which is just one of the many many reason why Delirium has to be one of my favourite dystopian books (ever).
☆☆☆☆☆