A review: The Art of Taxidermy by Sharon Kernot 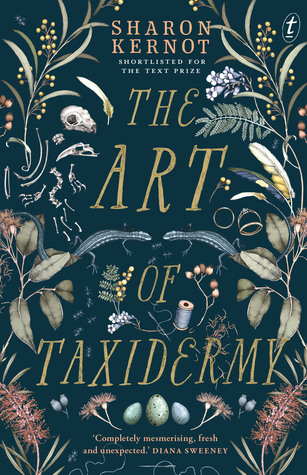 Lottie collects dead creatures and lovingly cares for them, hoping to preserve them, to save them from disintegration. Her father understands—Lottie has a scientific mind, he thinks. Her aunt wants it to stop, and she goes to cruel lengths to make sure it does.

And her mother? Lottie’s mother died long ago. And Lottie is searching for a way to be close to her.

The Art of Taxidermy is a heartbreaking verse novel exploring love and death, grief and beauty, and the ways we try to make sense of it all.

First impression: what a creepy name for a book. I had seen The Art of Taxidermy a couple of times listed on NetGalley but I skipped requesting it two or three times - simply because the title was so creepy. But my attention was drawn to the title, time after time, so I decided to give it a shot in the end. Who knows what kind of jewel it could turn out to be?

The book WAS creepy, but not creepy in the traditional way. The novel was quirky and heartbreaking and  the taxidermy  theme was just a tool to show something bigger. The novel was an exploration of a young girl's way to deal with death, grief, and longing, but also an exploration of family dynamics. The journey was both daunting and dark but there were also joys of discovery and friendship. Staying true to yourself even if it isn't easy or comfortable.

I didn't realize The Art of Taxidermy was a verse novel until I started reading. In fact, now in hindsight, I think the novel is at its best in its current form. The short, punctual poems were straight to the point but had a lyrical and melancholy tint to them. I found it so easy to get into the story, the beautiful imagery  and the rhythm made the whole reading experience smooth and calm.

"Clouds of pink coral drifted above us, almost close enough to touch."


There was one thing I wanted to see done differently, though. The author introduced a lot of different themes, and in my opinion, the book should have been longer (currently 240 pages) so that the author really could have dug deeper into some of the themes and topics. I think there's plenty of material to write just about grief and loss, but there was also mentions of racism and colonialization, WWII and immigration. While these topics did bring depth to the characters and were interesting, I think discussions of discrimination and aboriginal's status would have required a bit more space. In fact, those ideas would have required a book(s) of its own, just simply mentioning the discrimination felt like a cop out and riding on the topic instead of fully exploring it in depth.

All in all, The Art of Taxidermy was a moving piece and it made me think about death. Death is inevitable, but still many of us simply refuse to confront it or cope in unhealthy ways. Can we even deal with death in healthy ways, truly? I know I'm going to have big problems when death decides to visit me or my close ones. But we should try to see death as a natural part of life, because death will visit us all, and while it's unbearable, it's also something we have to learn to live with.