The DUFF by Kody Keplinger 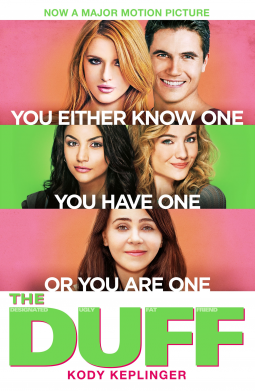 Soon to be a major motion picture!

Seventeen-year-old Bianca Piper may not be the prettiest girl in her high school, but she has a loyal group of friends, a biting wit, and a spot-on BS detector. She's also way too smart to fall for the charms of man-slut and slimy school hottie Wesley Rush. But things aren't so great at home and Bianca, desperate for a distraction, ends up kissing Wesley. Worse, she likes it. Eager for escape, Bianca throws herself into a closeted enemies-with-benefits relationship with him.Until it all goes horribly awry. It turns out Wesley isn't such a bad listener, and his life is pretty screwed up, too. Suddenly Bianca realizes with absolute horror that she's falling for the guy she thought she hated more than anyone.

Some of my friends had really liked The DUFF, and as I knew that a movie had been made out of the novel, of course I had to read it. In the end, it was a funny, sarcastic, and quick read which managed to entertain me from the very first sentence to the last page. In fact, I wasn't expecting to like The DUFF as much I first I thought I would. However, the thing is that I didn't start the book with expectations of the novel exploring the deep questions of life in a meticulous manner. Which is okay sometimes, not all books need to be life-changing.

One the things that made me enjoy myself while reading the book was the fact that Bianca isn't the prettiest or the most confident person in her school (or at least in her own opinion). Instead her fiery personality gets all the attention which is so great - not everything is about looks. And even if it was, big thighs and small boobs can be fabulous! Sorry, not just can be, but THEY ARE. Because in the end (and I know this is going to sound so cliche, but sorry this is the truth), what is inside your head conquers what's underneath your shirt in the short as well as in the long run. And that's my humble opinion, and Keplinger's too if she is trying to make a statement with The DUFF.

Even though The DUFF is a bit predictable, you can't really blame it on the book. This type of plot is typical of the contemporary genre, and I'm pretty sure that the majority of people who go about reading these types of novels know exactly what they are getting. And I suppose that's part of the charm. Many times (at least for me) contemporary books are all about the journey, not the destination. Contemporary novels help me to  get my mind off from dire and stressing things, and reads like The DUFF are my way to escape those problems for a while.

The DUFF wasn't all fluff and kisses, either. The book also took a darker turns as things such as slut-shaming and familial problems were discussed. Without these elements in the book, I probably wouldn't have liked the story as much. The problems gave Bianca and all the other characters the required substance, even though this didn't happen with all the characters. For example with Amy, Wesley's little sister. We literally meet Amy two times. Two times! And Bianca's mom maybe three or four times. I think we would have gotten a lot more out of Wesley through Amy, but unfortunately this possibility was left unused.

Nevertheless, The DUFF was fun yet an authentic look at one girl's life and problems, and I have to say I enjoyed the book as I read it in one sit (well, the book was pretty short too). Even though it didn't change my life or anything, I think I could recommend the novel with ease to anyone who wants a quick break from own problems, needs some high school drama, and steamy scenes.