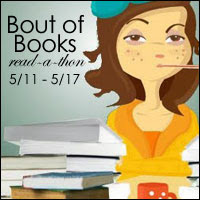 
hosted by Writing My Own Fairy Tale

And so it begins - the first challenge!

1. How do you organize your shelves?

A very good question because it really depends on my mood! At the moment my books are organised by the colour of their spines, usually starting from the brightest colours and meeting at the middle as white or black. Sometimes, I like to organise them in an alphabetical order, sometimes they are positioned in the order I want to read them.

The thing is that I'm abhorrently stuck with my own ways and don't read that much outside my favourite genres anymore which are fantasy and science fiction. Realistic fiction would probably be the second best genre, and my favourite book from that genre definitely is Fight Club by Chuck Palahniuk.

The thing is that I rarely give any 5 star reviews so it's pretty easy to remember which one it was, and it was Challenger Deep by Neal Shusterman.

4. What book are you most excited to read during the read-a-thon?

Hmm, I made a list of them here, and I guess I would have to say that The Painted Man by Peter V. Brett or Talon by Julie Kagawa. The thing is, though, that I've just made a bunch of new review copy requests, so I might change the list sooner rather than later haha.

5. What book do you recommend the most?

Ohh, the question. Can I recommend five? Oh, I can? GREAT. The Handmaids's Tale by Margaret Atwood, The Lies of Locke Lamora by Scott Lynch, Ready Player One by Ernest Cline, The Strange and Beautiful Sorrows of Ava Lavender by Lesley Walton, and A Storm of Swords by George R.R. Martin.

But I guess, if I really had to pick one... It would be A Storm of Swords by George R.R. Martin.

Email ThisBlogThis!Share to TwitterShare to FacebookShare to Pinterest
Labels: Bout of Books